This is the first ‘BE-hind the Shot’, Blake Ezra’s very personal account of the stories behind some of his most memorable shots over the past 12 years. We hope you enjoy it…

“In my first week as a full-time press photographer, my Picture Editor probably realised that I needed some tuition, and that despite having my photographs exhibited and creating some eye catching images on my travels… I perhaps wasn’t as technically proficient as I could have been. So he sent me from the office in Reading to nearby Windsor for the afternoon, with the instruction of taking some shots of local scenery and ‘using the lenses’ meaning getting to know how each lens operates and how focal length can change the entire shape of an image. It’s an exercise I’ve set many an apprentice since then.

Whilst wondering around, trying my hand at creating silhouettes with fast shutter speeds and compressing images using long lenses, I spotted a poster announcing that Her Majesty the Queen would be opening a new wing of the Windsor Shopping Centre the following week.

Upon my return to the office, I spoke to the News Editor and asked if I could head down to Windsor the following week to cover that event. After his quip of “well it makes sense for her to go, she does have a nice house in the town” he explained, quite rightly, that it wouldn’t be a priority as there would be many national press photographers there and my time would probably be better used shooting small stories with no competition for publication. A press agency is a business after all. The day came and the hour arrived, no stories of sex offenders at Reading Crown Court came in, and no tales of dogs that could bark the alphabet were in the local papers. “Off you go to Windsor”, I was told.

With a tingle of excitement I parked in the town and made my way to the shopping centre ahead of time. As a press photographer, you never know exactly what will happen next, but as a brand new press photographer with a career spanning 10 whole days, I was not totally sure about where to stand, which lenses to use, whether I’d get a clear shot, which way the Queen would face… and about a hundred other factors which could determine the success or failure of this trip. This was my first time photographing the Queen, it was a big deal.

I stood amongst a few other photographers and journalists that had assembled in a small pen near to the plaque that her Majesty would unveil. The next few minutes passed in the blink of an eye, but there was just a split second where the most iconic person on the planet looked directly towards me. I kept shooting and hoped that the camera settings were as they should be, knowing that in just a few moments it would all be over.

I immediately headed to review my photos and saw THIS shot. There are so many photographs of the Queen, and this one didn’t really include a huge amount of context, but I had photographed it, it was MY shot and one of the most exciting moments of my life as a photographer. I’d been keenly taking photos on my travels for a few years, sharing my shots and enjoying the process… but this was a new level. I’ve been lucky enough to photograph Her Majesty many times since this early afternoon in Windsor, and it is always an honour, but this stands out as a very proud moment for me.” 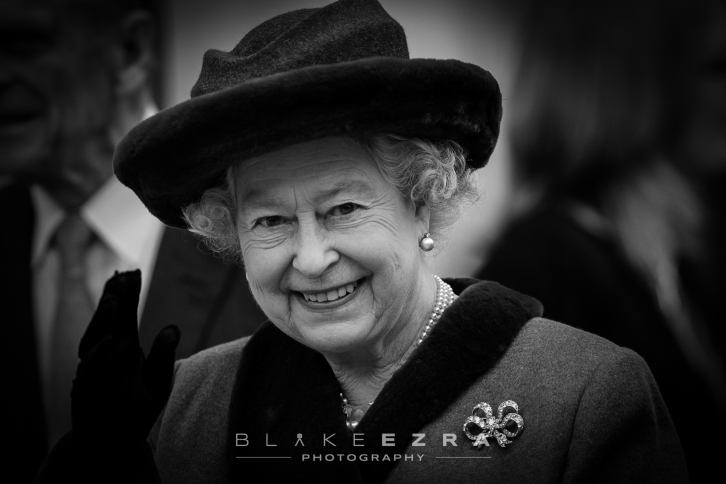